It is the time of year when you take your child to see Santa. My daughter was riddled with anticipation all week. When the kids at school would talk about santa, she would inform them, she was going to see santa on sunday. She talked about how she was going to ask him for a christmas tree. Even though we already have one. I guess, ours was not quite good enough. I blame her really, she did most of the decorating.

Many people throughout the land go to see santa at the mall. Not us. We go to Bass Pro. Why go to a hunting store to see santa? Free picture. Need I say more.

We arrive at 11 am. Santa does not get there until noon. They hand us a fast pass for santa at the door. Yes, folks, you can’t just wait in line for Santa at the store anymore. That would be too chaotic. You have to get an appointment. It was for 2:30. I was about to punch the guy in the face, when he was all it’s ok, just go home and come back at 2:30. Really? you obviously don’t have children. Luckily for him, I know they make him say that, so I will blame his boss for being poorly organized and not him.

Little did he know that I had friends in high places at this Bass Pro, I ran over to them frantic and in tears. Ok, not really. They came up to say hi, and I told them our dilemma. Frantic, is so much more exciting though. They ran away quickly and appeared with a fast pass for 12:30, like a hunting store employee super hero, here to rescue us. Score of a lifetime. Now we only had to kill an hour and a half. What do you do at a Bass Pro for an hour and half? Shoot guns? Why? Because the south. 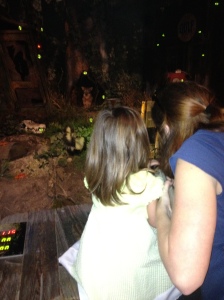 So turns out they don’t let two years olds shoot guns, but they do have a great arcade game, where you can shoot pretend guns at animals. The best part, the animals get mad when you shoot them.

Was it worth the wait? Well… She took one look at santa and went into hysterics. Then spent the whole car ride home talking about how scary santa was. Guess I better warn her teacher since santa is coming to visit them at school this month.